I still remember how back when Heavy Rain came out, it was nothing like anything I had ever seen or played before and it left a really huge impression on me. It had its flaws, but it made me realize how much I genuinely enjoyed story-driven games and since then, we’ve gotten so many amazing iterations on the genre such as the TellTale Games games, Life is Strange series and Until Dawn, and I unashamedly love all of these to bits.

For some reason though, when I played Beyond Two Souls I was left with a lukewarm feeling that I did not instantly understand. It has become clear as day to me now after finishing Detroit: Become Human. I wanted to like the game, I really did, but somehow I couldn’t. Around halfway through the game it finally dawned on me why.

Beneath all its complex path diagrams and choice structure, Detroit: Become Human, still at its core ultimately possesses The One and Only True Ending™ path, that can only be reached through a specific set of choices – be it on the level of the whole game or just a single a scene. Every other path feels somehow inferior or simply wrong. It did not sit well with me, personally.

Don’t get me wrong – I love making “wrong” choices in games like this when the unfavorable outcome is still just as valid as the “right” one and provides a satisfying continuation of its own. There are plenty of these in TTG games, Life is Strange and Until Dawn. It encourages you to jump back in, try different options and see what else there is to uncover because it feeds on your curiosity. I’ve played Until Dawn 4 times now with different friends and I am still not tired of it, not one bit!

I wanted to get this feeling –this curiosity– with Detroit: Become Human, but I don’t. Detroit: Become Human makes it very easy for you to fail, in the hopes that the failure will prompt you to want to start again, to play the scenes again, and reach the golden goose of the “true path”. A clear giveaway of this is how it likes to present you with a time limit for well over half of the objectives you face in the game. I’m sure there are plenty of people who do feel the allure of this tactic (and seriously, I envy you!), but for me it adds a layer of stress that I do not need in a game like this.

It really bums me, because I was actually, despite all this, very invested in the story of Detroit: Become Human – especially that of Kara and Alice (and by extension Luther). I really wanted to succeed with getting them safe and sound across the border. I worked really hard at it. The game  pushed back really hard too, though, and eventually I couldn’t stand it anymore and resorted to watching other people’s playthroughs  first whenever their chapter came up, because I did not bear to fail.

I had also decided to take as peaceful of an approach to the revolution as I could when playing Markus, which resulted in his premature death. I had at least managed to win the public opinion completely on my side with my pacifism and my sacrifice…. only to have it be ruined by a couple of non-influenceable cutscenes closer to the end where North, a fellow revolutionist, decides to go in guns blazing despite everything. Even after all that however, the public opinion was still in favor of the androids’ plight and I figured it would carry my lovely android family of Kara, Luther and Alice across the border.

Turns out I was wrong. Good public opinion in itself was not enough. I needed Markus to survive for the public opinion to mean anything, but since he was gone, my peaceful trio got violently gunned down at the border control. Again, I don’t mind living with my mistakes, but I still had the favor of the public so why didn’t it matter?

There is a difference between the purpose of showing that this kind of revolution demands its sacrifices and forcing them on you without proper reason.

(Don’t even get me started on the other method of crossing the border, which involved taking a boat instead of stealing another poor family’s bus tickets. That route had no outcome that would not end in someone’s sacrifice.)

I can see that the idea here was to have the stories of Kara, Markus and Connor intertwine and affect each other in crucial ways, but you are not given the tools to figure it out and deal with it without at least failing once and then trying again. Supermassive Games on the other hand takes great care to offer you consequences that make sense.

Treating another character very poorly in Until Dawn makes your relationship with them worsen and they might not save you down the line. In Hidden Agenda, a crucial crumb of information is given to you at an earlier point, which you can later use to avoid getting drugged – as long as you’ve paid attention. Detroit: Become Human‘s choices often have surprising immediate or down the line consequences, ones that you can’t prepare for by being attentive alone. 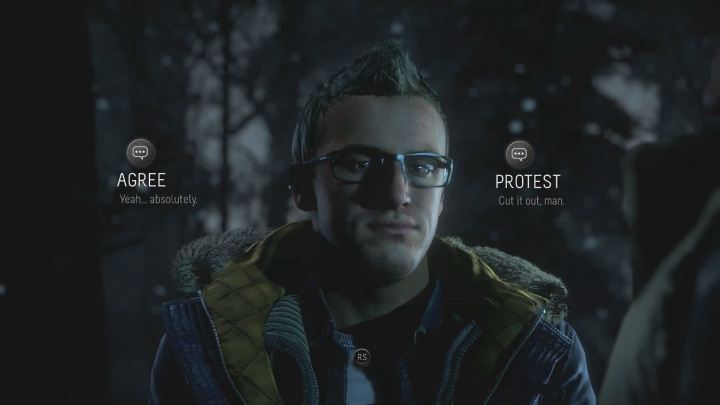 Not all of Detroit: Become Human is like this. There were quite a few great moments that will stick with me and which I genuinely enjoyed. When the game stops fighting against you, it’s amazing. I loved the philosophical pondering of if androids can be considered alive and the twist with Alice. Or grumpy Hank slowly admitting that he considers Connor a friend. I just wished it happened more often than it did.

I hope that for their next game, Quantic Dream can breathe more fresh air into the formula and genre that they helped define a decade ago. I want to love their games again, like I did Heavy Rain, but for now I keep leaning towards other studios’ spin on the genre because they dare to be more inventive in order to stand out.