Just as the title shamelessly declares, this is a story about me, Corpse Party and a bucket.
If you have never heard of Corpse Party, I would be sad but I would forgive you. Probably. It is a gem of a survival horror adventure game by  Team GrisGris that originally released in 1996 (fun fact: it was made with RPG Maker) and has been re-released and remastered a bunch of times since.

At first look it might be hard to see the appeal of Corpse Party as a horror game, due to its cutesy chibi characters and traditional RPG top-down-view, but it makes up for what it lacks with its lush environmental storytelling and gruesome, meticulously placed details making it a genre piece worth learning from.

Corpse Party is about a group of high school students, who kinda get a “friends forever” sort of charm wrong when one of their friends is about to move away and end up getting transported to an alternative reality where the old elementary school that once stood in the same location as their high school now still exists. Of course, grisly murders happened in this elementary school of old, which are at the heart of the story in this alternate reality. The cool twist to all this is that the characters did not all end up in the same place exactly, but instead they were scattered on various layers existing within the school. What this essentially means is that one group of characters might be exploring the school before or after another group does (or even at the very same time, as you don’t see the people who inhabit a different layer), resulting in neat uses of the environment to convey events in one timeline to another.

An early example of this, and perhaps the most obvious, is when the first character you control, Naomi, and her friend Seiko stumble upon a very unpleasant pile of guts and blood spread across and underneath a wall. 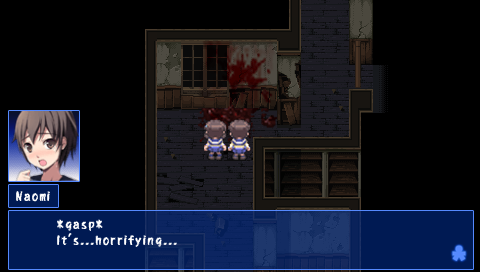 They take a moment to wonder what that could possibly be, but shrug it off as just another creepy thing in their new ominous surroundings (and let’s face it, when you are in a place like that your first priority should obviously be treating your hemorrhoids). Only later, when you control another character, Yoshiki, do you find out what actually happened. When you start the chapter as Yoshiki the wall is clean (which is horribly foreboding in and of itself) and as the story progresses you have the pleasure of witnessing it get stained by the body of one of your friends flying into it high speed. Ouch.

This incident cements the idea into your head that changes in the environment are important clues that you should be noticing in order to prepare for and perhaps avoid certain incidents. The game is also rather unforgiving in that you can easily trigger a bad end depending on what you miss (or should have missed but ended up spotting, which is worse) in terms of objects to interact with and/or examine…. and FYI, this game has A LOT of bad endings. It is constantly hammering into you that you should pay attention, you should remember things, you should be careful – otherwise you will fuck things up. For EVERYONE.

Here begins my story. Not long after I began my journey through Heavenly Host Elementary I came across a bucket full of yellow liquid. You can’t do anything with it, nor would you want to really, and soon I had dismissed it continuing on my merry way. 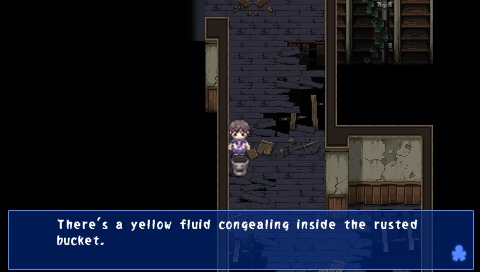 In a subsequent chapter, I encountered the bucket again and it was empty. Naturally, with all the knowledge I had of the workings of the game at that point, thoughts started racing through my head. Someone was going to pee into this bucket. And so the waiting began. Who was going to pee in the bucket and when? It consumed my curiosity and I was looking forward to closure like a kid waiting for Santa on Xmas.

Eventually, the game rewarded my patience – the little sister of my character, Satoshi, needed to pee very badly. I eagerly took her, Yuka, to the empty bucket thinking that the prophecy would FINALLY be fulfilled. I examine the bucket only to have her tell me she can’t pee there, she wants a bathroom. WHAT? No! I calmed myself down and grudgingly took her to the bathroom. I had already accepted that it was not the time for the bucket, it would come later, but then the game presented me with another glimmer of hope – Yuka found the bathrooms unusable.

I quickly went back to the bucket, but she still refused it. I told myself it was okay – I just had to be more patient, that’s all. What followed was a gruelingly long game of cat and mouse. Throughout multiple chapters I suffered through Yuka’s constant complaining in regards to her bladder and kept finding new bathroom opportunities for her… only to have her refuse them all. I was rocking on the edge of madness and obsession. Surely, this would soon come to a satisfactory end?

Throughout this, Yuka’s story escalates and she is separated from her brother and harassed by two guys already far into insanity – all the while still needing to pee. In the climax of her lonesome adventure, where she is running away from her pursuer, Yuuya, he manages to catch up to her and gives into his horribly violent tendencies. He kicks Yuka. She flies across the room.

Suddenly, my world came crashing down. The impact of the kick made Yuka pee herself. The event is very low-key, you could easily miss it. I felt so empty – all this waiting had amounted to nothing.

It was then that I realized that the game knew perfectly well what it was doing to the player, to me. It had been toying with my expectations since the moment I booted up the game and started to play. It made sure that I would understand that the environment is in a crucial key role in unraveling the story. It made me believe I knew how it operates. It made me take the bait by creating an environment in which the bucket would certainly catch my eye and further built upon it within the narrative – all just so it could step back, admire its work and laugh in my face as it tore it all away from me.

Playing this game is supposed to be painful and excruciating and nothing, NOTHING, stings as much as the disappointment of the bucket that turned out to be a red herring.