Since the live action Fullmetal Alchemist hit theaters in Japan recently, it’s a good time to look at a little linguistic pun that exists in the series (either on purpose or purely by coincidence).

In case you are not familiar with the setting of Fullmetal Alchemist, the story takes place in a world of alchemy where the rules evolve around the concept of equivalent exchange – when you transmute something, you need to give something of equal value in return. Because of this, human transmutation is strictly forbidden as the consequences could be unfathomably severe. The young boys Edward and Alphonse Elric ignore this taboo and try to bring their dead mother back to life. They not only fail but Edward loses one of his legs and Alphonse his entire body. Edward then loses even an arm in his frantic attempt to save his brother’s life by sealing Alphonse’s soul inside a suit of armor. The story then follows the brothers in their quest to find a way to get Alphonse’s body back.

(The first opening theme of the Fullmetal Alchemist: Brotherhood anime is amazing by the way, not that it has anything to do with this article) 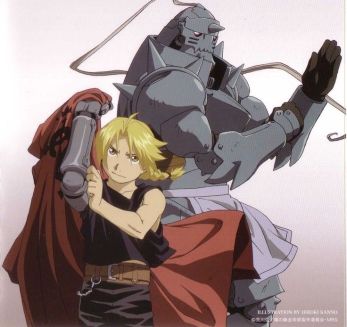 At its heart, Fullmetal Alchemist is a touching story of brotherly love that is ever present – even in the way they address each other, with Alphonse calling Edward “big brother” and Edward affectionately calling Alphonse “Al”.  Today we’ll be focusing on one of the brothers, Alphonse, and the quirks of the Japanese language.

Japanese as a language likes to make interesting distinctions when it comes to some things and one of the basic verbs, “to be“, is no exception. Depending on if you are considered a living being or an inanimate object, the verb changes completely – living things require the verb “imasu”, while inanimate objects require the verb “arimasu”. This is very important to get right, as let’s say you speak of a person and use “arimasu” by accident, you are actually implying that the person is dead (there are some unintuitive border cases though, with robots being referred to with “imasu” and plants being referred to with “arimasu”)!

If that wasn’t enough, the words also change depending on if you are using polite Japanese or casual Japanese. The case we just looked at above was the polite version. For the casual forms of the verbs “imasu” because “iru” and “arimasu” becomes “aru”.

This brings us back to Alphonse (you might already see where I am going with this). 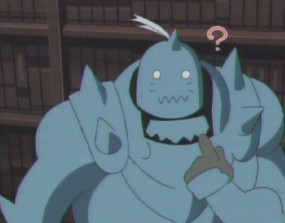 Japanese works with syllables instead of individual letter sounds, so in order to say Alphonse’s nickname “Al” with the syllables that exist you might think it would end up being “Alu”… except, that’s not completely right either. “L” does not exist in Japanese, so you have to compensate and go with “Aru” (the “r” sound is somewhere between the English “l” and “r” sounds).

This means that Alphonse’s nickname “Al” and the verb  used for the existence of inanimate objects (and the dead) “aru” are one and the same. When you make this connection, it all becomes a bundle of amusement and sadness in one when you realize that we are talking about a boy, who while spiritually alive, is physically dead and trapped in an inanimate (well, now animated thanks to his soul) set of armor. Damn!