Perhaps you’ve never heard of the game series called Shin Megami Tensei? Would it surprise you if I told you it was considered one of the Japan’s biggest role-playing game franchises alongside the other greats such as Final Fantasy and Dragon Quest? Japan is well-known for its abundance of long running role-playing series with most of them easily recognizable by Westerners, but Shin Megami Tensei has fallen between the cracks for being a bit of an odd one out.

Why is that, you ask? Well, considering the times (keep in mind this series dates as far back as 1987, though back then it was still just Megami Tensei and only made the transition to Shin Megami Tensei in 1992), many of the topics tackled in the games (such as heavy religious themes and criticism) were considered a pretty big taboo in the West and kept the series from making its debut overseas until the release of the first Persona game.

Now you may be wondering – wait, what does Persona have to do with this? Well, surprise, surprise, Persona is actually a spin-off series of Shin Megami Tensei! We’ll talk about this a bit more in the meat of this article, which is….

…Should you take the plunge and start playing Shin Megami Tensei?

The answer is yes, if:

You’re a fan of Persona.

Well, now that you know that Persona is a spin-off of Shin Megami Tensei, this one is pretty much a given. There’s quite a bit of overlap with the two, especially now that demon negotiations have made a comeback into the Persona series in Persona 5.

And while we are on the subject of demons, the demons in the Shin Megami Tensei universe are essentially your Personas from the Persona series so many of them will appear familiar to you. Their role is a little bit different though, as the demons you’ve recruited act as your party instead of the usual “other human characters as your party members” -shenanigans. This is handy and sometimes hilarious as your demons negotiating with other demons can have interesting outcomes.

The narratives of both series also deal with serious topics – though the Persona series will come across as more light-hearted and grounded in present day reality, as Shin Megami Tensei usually explores a rather grim world invasion setting and events. You could say that it can go a bit overboard at times, but still it’s a nice breath of fresh air in the genre of JRPGs where it is not uncommon to deal with similar subject matter over and over.

You enjoy such things as the alignment system.

Perhaps best known for its usage in Dungeon’s & Dragons (even though the original idea actually came from a 1961 fantasy novel by Poul Anderson, Three Hearts and Three Lions), this system also lies at the heart of the Shin Megami Tensei series. Oftentimes the games have three (very) different outcomes, depending on whether you favor Law, Neutral or Chaos. This is determined by the alignment of the demons you decide to be friendly with and recruit, as well as the personal motivations of the characters you decide to support.

Sometimes, however, instead of including all three main alignments an entry in the series might focus on one in particular and offer various outcomes within that alignment, such as Shin Megami Tensei: Nocturne that focused on Chaos and Shin Megami Tensei IV: Apocalypse that remained snugly within Neutral. Shaking things up like this opens up new possibilities for the games to explore.

With the “traditional three” -approach, the Neutral outcome usually ends up causing the least damage to everyone (but at the same time not granting anyone’s wishes in particular), but Shin Megami Tensei doesn’t consider that the “true ending” or “the good ending” and instead all endings are deemed just as valid, which really just leaves it up to you, the player, to decide what you prefer.

On an additional note, if you happen to be a fan of the game called Catherine, the morality system in that also derives from this Shin Megami Tensei alignment tradition.

Shin Megami Tensei can be considered one of the earliest successful uses of the cyberpunk aesthetic in video games, with its inventive blend of science fiction elements and the occult, and that history alone should make it worth your time.

Also, the timing is great.

If you’ve missed out on Shin Megami Tensei so far but have some interest now, it’s a good time to jump in as it’s almost time for a beautiful remake of Strange Journey.

This entry in the series strays a bit from the usual and takes place in Antarctica with you exploring a strange occurrence, that sounds a lot like the Second Impact from Neon Genesis Evangelion, while looking like a Cyberman from Doctor Who. What more could you ask for? 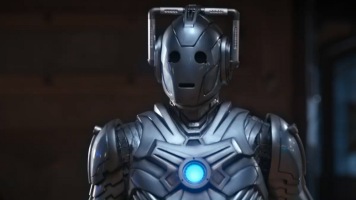 And that’s not all! After years and years of pause (the previous time being in the era of the mighty PS2) we are on the verge of getting a new Shin Megami Tensei on a home console (Switch) rather than a handheld, of which we should know more come October 23rd.

The answer is no, however, if:

you are easily offended by controversial subject matters.

As already briefly mentioned above, Shin Megami Tensei likes to explore themes and topics that might be considered rather controversial, so if you are not ready for such things as religious criticism, blending of Christian and occult imagery, political references, sometimes rather provocative demon designs and even cannibalism (yeahhh did I mention that in one spin-off series, Digital Devil Saga, you gain demonic powers and to keep yourself from going crazy you have to keep devouring other humans? … yep, that happened).

If you can get past the controversies though, the philosophical ponderings of the series offer quite a lot to think about, even if the games sometimes end up being a bit clumsy and not all topics are handled as sensitively as they probably should. Take it with a grain of salt and you’ll be in for quite a ride.

It’s also worth mentioning that the golden oldies are readily available on PSN for quite cheap!

One thought on “Should YOU play Shin Megami Tensei?”